THE CASTAÑEDA IS NOW OPEN!

After closing seventy years ago, rehabilitation began in
January of 2018 with a crew of fifty local artisans.
In April of 2019, the Castañeda re-opened.

The Castañeda was built in 1898 and was Fred Harvey’s first trackside hotel – the beginning of America’s first hospitality empire. The hotel is roughly 30,000 sq ft, plus a 500 foot long arcade wrapping the entire east facade and courtyard. There is also a basement under the north wing for kitchen supplies, under the south wing for boilers and mechanical equipment, and a huge attic, which was uninsulated and never used. The Santa Fe Railway mainline ran directly in front, connecting Las Vegas New Mexico to Chicago and Los Angeles.

The Castañeda was designed by Frederick Roehrig, a prominent Pasadena architect. It was the only building he designed for the AT&SF Railway. This was the earliest Harvey House to be built in Mission Revival style, and became the prototype of nearly all future Harvey properties.

Fred Harvey was the first major American company to hire vast numbers of women, eventually more than 100,000. The beautiful Rawlings Building -across Railroad Ave from the Castaneda – was a dormitory for the Las Vegas Harvey Girls. It is also being restored now!

The Castaneda is about one mile east of the Plaza Hotel and ‘Old Town Las Vegas’. The entire area around the Castaneda is a registered historic district. Most buildings here were constructed in the late 1800’s. The Santa Fe Railway replaced the Santa Fe Trail as the way goods traveled to and from the Southwest so many prominent merchants built warehouses here.

The new hotel was so successful that in 1902 the AT&SF built the Alvarado Hotel in Albuquerque – based on the design of the Castaneda. The Alvarado was torn down in 1970, an act of destruction so terrible it sparked the historic preservation movement in New Mexico. But the Castaneda survived, mostly abandoned and crumbling, for seventy years.

To further develop tourism in the region the Fred Harvey company developed the ‘Indian Detours’. Luxury touring cars and vans (called ‘Harvey Cars’) with drivers and guides took intrepid travelers between the Castañeda, La Fonda Hotel in Santa Fe, La Posada in Winslow, and El Tovar at south rim of the Grand Canyon – and many places of interest in between.

Visitors to a Harvey House would also be offered authentic Indian products such as jewelry and pottery. Ultimately Fred Harvey became the biggest purveyor of native arts and crafts in the Southwest.

The Harvey empire prospered until World War Two. After that came highway hotels and suburbanization. Most Harvey Hotels were in downtown railroad districts, which increasingly lost their appeal and population. Most of the Harvey Hotels were eventually abandoned and demolished; the only ones that prospered were in prime tourism locations and not on the main rail line: El Tovar and Bright Angel at the Grand Canyon and La Fonda in Santa Fe. The Castaneda will be only the second Harvey Hotel to be resurrected, joining La Posada in Winslow. Thank you for being our guest, and for helping us save this remarkable history!

Tours of the Castaneda and Plaza Hotels – and many other beautiful places from Las Vegas’ remarkable past – are available from Southwest Detours.
Please call 505.459.6987 or e-mail info@southwestdetours.com for more information.

To reserve your room call us at 505.425.3591. We also welcome tour groups, but you must reserve well in advance. The total room fee will be taken as a deposit in advance to confirm your reservation. If you would like to cancel, you must do so 7 days prior your arrival date to receive a full refund of your deposit.

Bar Castañeda & Kin at Castañeda are located inside the historic Hotel Castañeda in Las Vegas, New Mexico. Dining at the Castaneda Hotel is a unique experience featuring two separate restaurants operated by the same chef.

Kin at Castaneda is a fine-dining restaurant featuring a chef’s tasting menu with local New Mexico product changing seasonally. Kin is located in the dining room of the Castaneda and will open in the future. Visit kinlvnm.com for menu and more details.

Bar Castaneda Bottle Shoppe, which features craft NM beers, fine wines, spirits and carry-out food items, is NOW OPEN! Our new retail space is located on the north side of the hotel with access from the loading dock.

(The Bottle Shoppe serves as the pick up place for the Bar Castaneda carry out dinner menu.)

Visit our facebook page or our construction blog: hotelcastaneda.blog to get the latest news about the Castaneda.

Allan Affeldt, Believing in our Past.
Click image below to read full story

The Castaneda is a historic Fred Harvey Hotel located in Las Vegas, New Mexico along Amtrak’s Southwest Chief line. The hotel opened in 1898 and closed in 1948. In 2014 it was purchased by Allan Affeldt and Tina Mion, the owners of La Posada Hotel in Winslow, Arizona (www.laposada.org). In 2018 Allan and Tina transferred title to their public-benefit 501-c3 corporation – the Winslow Arts Trust – though they remain responsible for the restoration, operation and financing. 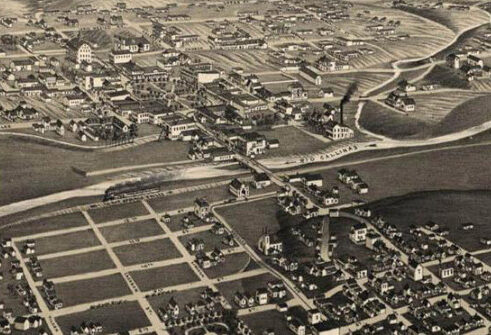 Las Vegas was established in 1835 after a group of settlers received a land grant from the Mexican government. The town was laid out in the traditional Spanish Colonial style, with a central plaza surrounded by buildings which could serve as fortifications in case of attack. Las Vegas soon prospered as a stop on the Santa Fe Trail. 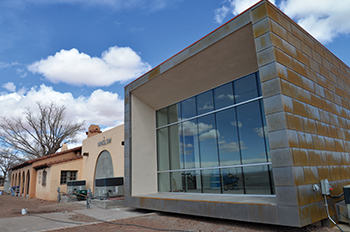